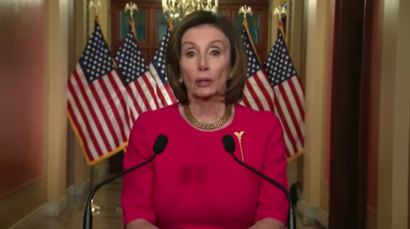 PolitiFact, a fact-checking website acquired by the Soros-funded Poynter Institute in 2018, flagged pro-life bloggers as “False” and denied that House Speaker Nancy Pelosi (D-CA) had attempted to put abortion funding measures in the upcoming relief bill.

The Daily Caller reported that “House Speaker Nancy Pelosi sought to include a potential way to guarantee federal funding for abortion into the coronavirus economic stimulus plan, according to multiple senior White House officials.”

LifeNews.com issued a devastating response that lays bare how PolitiFact has failed in its duty to actually check facts.

Pelosi reportedly lobbied for “a mandate for up to $1 billion to reimburse laboratory claims, which White House officials say would set a precedent of health spending without protections outlined in the Hyde Amendment,” said The Daily Caller.

“The Hyde Amendment,” according to The Daily Caller, “blocks clinics that perform abortions from receiving federal funding, and Democrats have pushed the Trump administration to end it sence he was elected in 2016.”

One anonymous White House official who spoke to The Daily Caller explained that “Under the guise of protecting people, Speaker Pelosi is working to make sure taxpayer dollars are spent covering abortion — which is not only backwards, but goes against historical norms.”

PolitiFact issued a fact-check, which claimed, “There’s no evidence that Pelosi was sneaking any funding toward abortion services in the bill.”

LifeNews.com responded, saying in a piece of its own to counter PolitiFact’s claim,

“There is not a line item in the bill that adds abortion funding, but rather the lack of the inclusion of the Hyde Amendment allows the possibility of funding to pay for abortions via reimbursements. Without the Hyde language attached, abortion funding is a distinct possibility.”

Another of LifeNews.com’s critiques was in response to Politfact’s claim that “No draft of the legislation had funding for abortion in it.”

“LifeNews.com spoke with a senior Congressional official who reviewed multiple drafts of the anti-coronavirus bill, including drafts the White House saw that contained abortion funding. Initially, some of the funding was stipulated under the National Medical Disaster System program, which does not have the Hyde Amendment protections applied to it — thus allowing abortion funding.”

In that same critique, LifeNews.com noted that “Politi[F]act admits that it never heard back from Pelo[s]i’s office — ‘When we reached out to Pelosi’s staff, they declined comment.’ — but issued the ‘false’ rating anyway despite having no evidence.”

LifeNews.com also said that “Politi[F]act ignore[d] pro-life groups and elected officials who were familiar with the process who confirmed that Pelosi originally included abortion funding in the bill.”

“While schools are closing and hospitals are gearing up, Speaker Pelosi is waging unnecessary culture wars. Speaker Pelosi should be fighting the coronavirus pandemic, not politicizing emergency funding by fighting against the bipartisan Hyde Amendment,” Sasse told National Review in a statement. “We need to be ramping up our diagnostic testing, not waging culture wars at the behest of Planned Parenthood. Good grief.”

LifeNews.com also called out PolitiFact for “erroneously claim[ing] the Hyde Amendment ‘was enacted in 1997,’ when it was originally added by Henry Hyde to Congressional legislation in the 1970s and upheld by the Supreme Court in 1980. How can Politi[F]act fact-check the Hyde Amendment when it gets this basic fact incorrect[?]”