Wondering why that pig just whizzed by your window? On MSNBC this afternoon, Brian Williams actually criticized the Governor of Minnesota and the Mayor of Minneapolis, Democrats both, for their inaction last night in the face of the riots. Williams accused them of having “abandoned and offered up a police precinct.”

Williams was interviewing Bill Bratton, a past police commissioner of NYC, Boston, and Los Angeles, and now MSNBC’s senior law enforcement analyst. Williams asked Bratton whether he could imagine, in any of the departments he had run, a situation akin to what took place in Minneapolis last night.

“Let’s be honest about what it was: the governor and mayor were spectators. Police and fire were not allowed to engage. And they abandoned, and offered up, a police precinct.“

Bratton responded by saying that the situation reminded him of the Los Angeles police department [before he was commish], abandoning the famous intersection of Florence and Normandie during the Rodney King riots. That, said Bratton, sent a signal that “anything goes,” and led to the City of Los Angeles burning for 48-72 hours thereafter.

BRIAN WILLIAMS: We are happy to be joined now by Bill Bratton, who served two terms as commissioner of the NYPD, also led police departments in Boston and Los Angeles. He is these days our senior law enforcement analyst.
Commissioner, can you imagine a case in any of the departments you ran where we would see a night like last night?

And let’s be honest about what it was: the governor and mayor were spectators. Police and fire were not allowed to engage. And they abandoned, and offered up, a police precinct.

BILL BRATTON: Well, Brian, it brings me back to the 1990s, when in Los Angeles, the Los Angeles police department in the midst of that riot, abandoned Florence and Normandie. And that was the tipping point. That was the first time in the history of the L.A. police department, as brutal and abusive as they were of the black community, where they gave up a street. Giving up that intersection on live news: that sent the signal that anything goes. And for the next, as we saw 48 hours, 72 hours, the City of Los Angeles burned.

BONUS COVERAGE: Ironically, not long before Williams’s surprising criticism of the way Minnesota officials abandoned the Third Precinct, he teed up Derrick Johnson, the President of the NAACP, inviting him to respond to President Trump’s tweet: “when the looting starts, the shooting starts.”

Johnson responded by blaming President Trump for the coronavirus, and for giving people the feeling they could harm blacks and Jews.

My tweet includes the clip of the Williams/Johnson exchange. 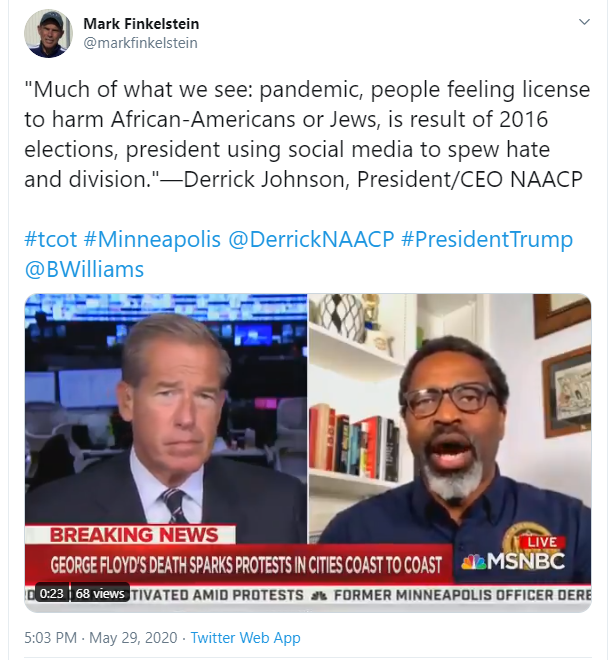