Washington Post art critic Philip Kennicott launched another one of his Trump-dystopia jeremiads on Friday, turning the temporary outrage of a CNN crew filming the Minneapolis riots getting arrested into some sort of grand metaphor of George Orwell’s 1984. The headline was “Through the lens of a CNN camera on the ground, a view of American disintegration.” 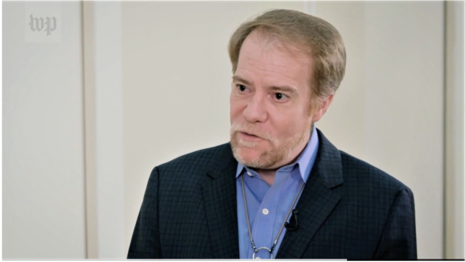 When George Orwell distilled his chilling vision of totalitarianism into a single imIIage, he imagined this: “If you want a picture of the future, imagine a boot stamping on a human face — forever.” The last word is critical — forever. It implies a choice, a small measure of hope. As long as the picture of a boot on a face is intolerable, there is hope for political self-determination, a meaningful public sphere and democracy. When it becomes tolerable, when it is normalized and visions like the one America witnessed Friday morning are commonplace, then the authoritarian longings latent in every democracy become totalitarian reality, and there is no escape from what Orwell called the “intoxication” of brute power.

CNN reporter Omar Jimenez was somehow Winston Smith in this scenario. It wasn’t long before Kennicott somehow turned this into a Trump thing:

That he, a journalist of color, was arrested by cops whose pale arms suggest that many of them are white, and that CNN, which has been a consistent object of President Trump’s puerile and corrosive abuse, was the target raises deeply disturbing questions. Among them: How many police in America are loyal not to the public but to a racist brand of populism that has found in the president its vigorous avatar?

This is a little puzzling, since the CNN crew was arrested by the state police, and Minnesota’s governor — the man who apologized for the CNN arrests — is a Democrat. Trump had nothing to do with it.

But Kennicott was on a metaphorical roll. Because cameras help resist America’s brutal police forces: “cameras have caught police gunning down people of color, resting their body weight on their necks, choking them while they lie passive and unresisting. State-sanctioned murder feels everyday and commonplace; nothing changes; and yet the camera, which captures it all, is the best hope for renewing at least a little bit of principled resistance.”

The arrest of the CNN crew cannot compare, by any moral calculus, to what the camera caught on Monday: bystanders pleading with police to stop killing a man, bystanders who very likely knew their own cameras offered little protection if the police were indifferent to the cries of man begging them to let him breathe. But it is another epochal moment in the disintegration of American public life, and its consequences could be profound.

If the police target journalists, and single out journalistic organizations they disapprove of for particular sanction, then we can be certain of one thing: There will be more George Floyds, more abuses of power, more corruption of public life.

The boots we saw in Minnesota early Friday will be there and everywhere, trampling faces, forever.

NY Times Sees Conservative Assault on Virus Orders,’ But No Label on ACLU

MSNBC: Trump Rally a ‘Slap in the Face’ to Black Tulsa Residents