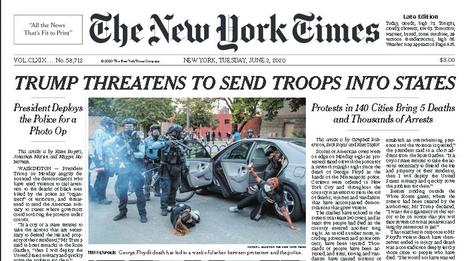 The New York Times appears to have once again caved to the radical left on Twitter and changed a perfectly accurate headline deemed sufficiently anti-Trump.

This was the original banner headline on the front page of Tuesday’s first edition on Twitter, innocently sent around by print editor Tom Jolly on Monday evening: “As Chaos Spreads, Trump Vows To ‘End It Now.’” The off-lead story directly below it read, “President Issues Threat to Send Military In.”

After left-wing outcry, including from former Obama staffers and media favorites Jon Lovett (“Just pathetic”) Ben Rhodes, and Rep. Alexandria Ocasio-Cortez (“You’ve got to be kidding me”) Tuesday’s front page was quickly and radically altered, presumably to please the paper’s new crop of quasi-editors.

The banner headline now reads: “Trump Threatens to Send Troops Into States,” basically boosting the original, hostile off-lead into the banner headline slot. In its place was put yet another hostile headline, “President Deploys the Police for a Photo Op,” a reference to Trump clearing a path to St. John’s Episcopal Church, which was set on fire during rioting.

(Reagan Battalion made this compare-and-contrast image.)

It’s the latest example of how closely the supposedly objective New York Times tracks with the liberal Twitterati. The paper also did an abrupt headline reversal under leftist pressure in August 2019, in the wake of the mass murders in El Paso and Dayton, when its original headline, “Trump Urges Unity Vs. Racism” was found insufficiently hostile (although a perfectly accurate summation of what Trump said about the killings). The left demanded “context” about Trump actually being a racist demagogue. It was changed to “Assailing Hate, But Not Guns.”