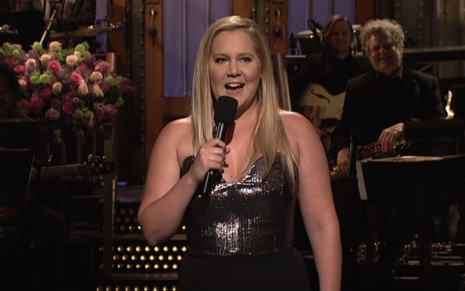 This celebrity-endorsed Breathe Act, which Breitbart reported has been framed by its creators as a modern day civil rights issue, aims to divest funds from local law enforcement and Immigration and Customs Enforcement and put that money into “social welfare, health care, education, and environmental initiatives.”

The “Breathe Act” – clearly taking its name from some of George Floyd’s last words as he died at the hands of a police officer in May –  was created by Movement 4 Black Lives, a political coalition consisting of groups like Marxist radical outfit Black Lives Matter and Color For Change.

Movement 4 Black Lives unveiled the bill on July 7, posting its main provisions online, which include getting rid of “police, prisons, and all punishment paradigms.” As the image Schumer shared on Twitter indicated, “The BREATHE Act defunds the police and divests from incarceration, meaningfully invests in Black and Brown communities, holds politicians accountable & reimagines public safety.”

Of course, since this is Black Lives Matter rhetoric, we all should be recognizing this as a campaign for the complete and fundamental transformation of the judicial system and law enforcement based on the lies that police are systematically harming the African American Community. Disguising it as a racial issue and characterizing it as a civil rights struggle is all part of the subtle plan to get overly scrupulous folks to throw out our necessary systems of law and order.

To illustrate the point, consider how Black Lives Matter activists humiliated Minneapolis Mayor Jacob Frey on the streets of his own city last month when he refused to remove law enforcement from his city completely.

But celebs like Schumer, Paquin and Piper Perabo are willing to align themselves with this radical push. After all, if it all goes to hell they can afford their own private security. Until then, they’d rather be on the “right side of history” as the progressive mob continues its campaign of intimidating normal folks who don’t want to get rid of the police.

Schumer tweeted on July 7, “Breonna Taylor. Tony McDade. Ayanna Stanley-Jones. Elijah McClain. Natasha McKenna. And countless more. Their lives mattered. As a supporter of the #BREATHEAct, I’m advocating for the change I want to see.” Yeah, no police. Great idea!

Friday Night Lights actress Connie Britton tweeted, “The #BREATHEact was unveiled today. Please learn about it and join the movement.”

Selma filmmaker Ava DuVernay tweeted, “This bill divests taxpayer dollars from discriminatory policing and invests in a new vision of public safety.” Oh, interesting how she called it “discriminatory policing,” as if the bill is only going after bad aspects of law enforcement. They’re going after policing in general. Perhaps DuVernay realizes the truth is too radical for her image.

Actress Piper Perabo referred to herself as “proud supporter of the #BREATHEAct” on Twitter and then linked to the bill’s unveiling ceremony which took place on July 7. The online rally featured a performance by John Legend, leftist African American personality Marc Lamont-Hill and the self-avowed “Marxist” creator of Black Lives Matter herself, Patrisse Cullors.

Oh, also “Squad” members Rep. Rashida Tlaib (D-MI) and Rep. Ayanna Pressley (D-MA) were “special guests” at the unveiling. As if there wasn’t enough proof already that the “Breathe Act” is unhinged.

Even Leftists Can Be Right About Opinionated Fact Checkers

Watch These Smug CNN Promos Touting Their Own Riots Coverage, Reporter Being Arrested