Joe Biden’s Wednesday appearance on the National Association of Black Journalists and Hispanic Journalists (NABJ-NAHJ) Virtual Convention made headlines for his racially charged comments, but there were many moments worth uncovering that the mainstream media didn’t shed light on. Four liberal journalists interviewed Biden, and revealed the presumptive Democratic nominee’s true radical beliefs on many hot button issues. 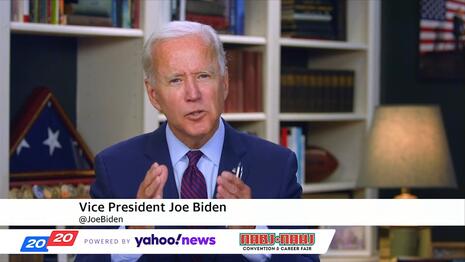 Biden was pressed by CBS News’s Errol Barnett to put America back in lockdown a soon as he takes office, and Biden’s response was barely coherent:

Barnett received the exact answer that the liberal media was looking for: Biden to close down this country again and make sure Americans all stay in their homes in fear.

NPR’s Lulu Garcia-Navarro guaranteed that a Biden presidency would mean that illegal immigrants would have access to free-government provided healthcare:

The Democratic Party has been trying to play the card that Biden is some sort of moderate, when in reality he is the most far-left candidate of a major party that America has ever seen. Biden has surrounded himself with radicals, and will implement leftist policies as president, all with the unwavering support of the media.

Tia Mitchell of the Atlanta Journal revealed to the America people that Biden supports reparations for African Americans:

In this virtual convention the leftist media was able to push all of their radical stances into Biden’s campaign, and Biden took the bait. Biden, at times, barely knows where he is with his absurd gaffes like this:

It seems as though Biden is being propped up by the Democratic Party—and the mainstream media.

ERROL BARNETT (CBS NEWS): Now, on day one of your presidency. If we listen to the scientists and the doctors, as you say you will do, you’re likely to begin your presidency in the middle of this ongoing pandemic. So how likely is a rollback on day one off the re openings of businesses that we’ve seen nationwide?

JOE BIDEN (DEMOCRATIC NOMINEE): Well, look, that’s that’s, Ah, good question, but an unfair question, because I have no idea what this president’s gonna leave me with. If he acts responsibly, which he hasn’t done thus far, backs responsibly. I may be in a position where we don’t have to roll back, but if he continues to walk away, wave the white flag and just stay open and then listen to the some quacks telling him that what we should be doing.  And you can, you know, mass cause, can, I mean cause, COVID-19, you know, the whole thing, is he’s got to be more responsible. So it depends on what I inherit to determine what I’ll be able to do and say and should be saying on the day I sworn in, if that in fact happens.

BARNETT: So based on what you see now; would you roll back the re openings?

BIDEN: I’m not going to speculate on that because I don’t know what is going on.

BARNETT: Based on what you see now.

BIDEN: What I see now I think we are. If I were president, I’m sorry if our president today I would roll back. The reopening is in a number of places because look, masks are, it’s clear mask  and social distancing make a gigantic difference in terms of the spread of this  disease. It’s simple. It’s factual. It’s real. And everyone, wherever there is a  significant percentage of people with COVID, it should be required to keep social  distancing and mask. Bar should not be open. There should not be congregations of more than 10 people. We should have circumstances where in fact, they react responsibly, including in places of work where people are a where they are, they’re able to go in and continue to work in terms of social distancing, testing and alike. He’s done none of that. None of that is part of what he is suggesting.

BIDEN: And I spent an hour and a half today on the telephone. I mean on—ven, excuse me on what we’re doing right now on camera.

LULU GARCIA-NAVARRO (NPR): Mr. Vice President, I’d like to ask you about healthcare, because obviously this pandemic has exposed many weaknesses in healthcare. In your platform, you’d extend medical benefits to DACA recipients. But what about the workers who have no protection? Specifically farmworkers now deemed essential to make Americans, um, sure, that they have food on their table? Should Undocumented immigrants also be able to get subsidized healthcare?

GARCIA-NAVARRO: So just to clarify, you are saying that if you are undocumented, you would be able to get a vaccine for free subsidized?

GARCIA-NAVARRO: I’d also like to ask you this. This pandemic has exposed as I’ve mentioned so many weaknesses in the healthcare system, um, the most vulnerable, often black and brown communities ah, have been handling much of the financial burden. Before the pandemic, you were against comprehensive single payer system.  Um, now, if Medicare-for-All came across your desk as the pandemic um has hit so hard, would you veto it?

BIDEN: It’s not going to come across my desk, but look, the pandemic has not only thorn through our nation, devastating families, wrecking economies, it’s exacerbated some of the worst inequities. I’m gonna fight for health and health equities, but you don’t need the quickest way to get that. That’s for black and Latino Americans to have access to the Obamacare with a public option. That’s the quickest way we get everybody covered.

GARCIA-NAVARRO: But hasn’t this pandemic and the tsunami of layoffs shown the limits of private health care that is tied to employment?

BIDEN: No, it hasn’t, in my view, those countries that have in fact, ah, single payer systems that hadn’t helped them very much, either. The question is, what do we do about corralling the pandemic and treating those who are affected by it. Everyone who’s affected by the pandemic is access to free care for anything having to do with that pandemic.

TIA MITCHELL (ATLANTA JOURNAL-CONSTITUTION): The city of Asheville, North Carolina, recently approved what they called reparations to their African American community in the product in the form of homeownership, affordable housing and access to capital for businesses. My question for you is do you think the American government owes black people reparations and what form, if so, should it take?

BIDEN: I think the studies suggested by my friend Cory Booker should be followed through and see. In the meantime, we can’t wait. If you take a look at my Build Back Better Plan what you’re probably having a chance to read.  It does all the things that Asheville just did.

GARCIA-NAVARRO: Should you win, would you follow through on the many investigations? Could you envision him, a former president being prosecuted if the evidence shows wrong doing?

GARCIA-NAVARRO: Including a former president?

BIDEN: I don’t know what some of these cases going on in the New York courts are. I don’t know the detail of those cases. And so if there is a pro, if there’s a case in underway that in fact has to be pursued, and I believe it should be pursued that Attorney General thinks it is, that’s a very different thing. But in terms of saying, I think the president violated the law, I think the president did this therefore go and prosecuted. I will not do that.

GARCIA-NAVARRO: But you, if it shows that there was wrongdoing, you believe that that a president could actually be prosecuted.

BIDEN: I don’t think anyone is above the law. And, you know, I love the way you’re trying to get me into this thing about lock him up. You know, I’m not going there.

Harrison Ford Blasts ‘Son Of A Bitch’ Trump & Climate Deniers: Science Is ‘Out The Door’

‘UNASHAMEDLY PROUD’: Jameela Jamil Quadruples Down On ‘Shouting’ Her Abortion